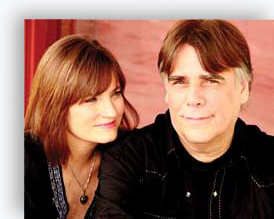 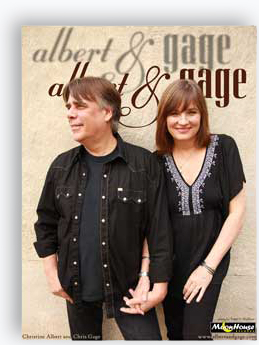 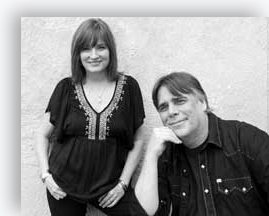 Austin, Texas duo Albert and Gage (Christine Albert and Chris Gage) have a personal and musical chemistry that radiates from the stage. The joy they experience making music together is evident as they travel through their musical roots, moving from country and folk to blues and French chansons. The integrity of their musicianship and the rare blend of their voices create a unique and cohesive sound as Gage effortlessly switches from guitar to piano and accordion throughout their set to follow the mood of the music. Austin songwriter Jimmy LaFave once described Christine as a “wondrous singer with a beautiful focus and unrestrained grace.” She had a prolific recording career as a solo artist before meeting Gage, including the acclaimed “Texafrance” series, a bilingual tribute to her European family roots. Christine’s most recent solo CD “Everything’s Beautiful Now” explores the richness of loss, an issue she deals with every day as Founder & CEO of Swan Songs®, a non-profit that fulfills musical last wishes. Ms. Albert has also served for 12 years on the national Board of Trustees of the Recording Academy (known for the GRAMMY Awards®), eventually rising to the position of Chair of the Board and currently serving as Chair Emeritus. In addition, Christine serves on the Board of Directors of Musicares® and the Latin Recording Academy®.

Chris Gage, the Academy of Texas Music’s “Musician of the Year 2011” is no stranger to a tour bus, spending many years on the road with Red Willow Band, Roy Clark and Jimmie Dale Gilmore and until recently played lead guitar on tour with Jerry Jeff Walker in addition to his Albert and Gage shows. He's a veteran of TV shows including Conan O'Brien, The Tonight Show and Hee Haw.  He’s a member of the South Dakota Rock and Roll Hall of Fame and an inductee into the SD Friends of Traditional Music Hall of Fame. Chris has been in the all-star house band on Austin City Limits Hall of Fame show for the last four years, and received 2 honorable mentions in the Austin Chronicle Music Poll.

Chris and Christine own MoonHouse Studio in south Austin, where the “Maestro” maintains a full schedule as an in-demand producer and studio musician, most recently co-producing Jerry Jeff Walker’s latest release “It’s About Time”. Since teaming up in 1996 the couple has released six Albert and Gage albums on their own MoonHouse Records label, as well as their solo projects and releases by other artists.

For many years every Monday night in Austin you could find Christine and Chris holding court at separate popular residencies. Christine and guitar legend Bill Kirchen hosted “Mystery Monday” at El Mercado, featuring a great band and a special guest each week. When that show ended at 9 pm music lovers would migrate to Donn’s Depot, where Chris Gage would sit at the grand piano surrounded by regulars every Monday (for 25 years), while a surprising and spontaneous string of guests come up to join him for a few songs. After the pandemic, Mr. Gage will return to the Donn's Depot piano bench and Ms. Albert has offers on the table for a return to a weekly stage presence.

For the past year during lockdown, the duo has live streamed concerts from their home studio every Monday and Friday at 8 pm. In the “Live Music Capital of the World” Chris and Christine have carved out an enduring place for themselves and their music.

The Austin Chronicle by Margaret Moser June 29, 2001 **** "Christine Albert and Chris Gage demonstrate the art of good album making so effortlessly on Burnin' Moonlight, it's a lesson to remember."

Dirty Linen (December, 2001) "Always interesting harmonies, inventive musicianship, and thoughtful writing, sparked with a dash of fun, make this one worth investigation for acoustic music and singer/songwriter fans."

Bill James / Belton Texas Acoustic Concert Series
"Albert and Gage drew a record crowd to our acoustic concert series, and proceeded to put on a high-voltage, crowd-pleasing performance. Country, rock, blues, folk, French torch - it didn't matter. They nailed 'em all. Christine Albert alone is a singer-songwriter of no small talent - just look at the awards she's earned. Put her together with Chris Gage - a powerhouse in his own right - and you have a duo that's just about unstoppable! I can't speak for Chris - I didn't know him beforehand - but I've been watching Christine's musical evolution over the past five years, and teaming up with Chris has highlighted her already-considerable talent. You can't go wrong with a pair of aces like these."

Houston Press by Rob Patterson (October, 2001)
"From George Jones and Tammy Wynette to Richard and Linda Thompson, male-female duets are one of popular music's most delightful permutations. And the Austin-based duo of Christine Albert & Chris Gage easily slot right in with the best. Their vocals intertwine like two passionate lovers - the two are a couple offstage as well - and their performances are an upbeat celebration of songs and the art of singing them. Albert's honey-drenched voice is one of the best in Austin, gracing everything from a CD-length salute to her Swiss-French roots to Bluebell Ice Cream ads. The South Dakota-bred Gage is a multi-instrumental wizard who has played with Roy Clark and Jimmie Dale Gilmore, and his rich tenor complements Albert's voice like a graceful bow. Their two CDs and stage shows include everything from memorable originals to choice cover material. An evening with the two is a fun and heartwarming experience in which music truly is the food of love."

Lindsey Rausch
A blend of voices equals one soulful show. "This folk/country duo have created a harmonic sound with original and compelling performances that are hard to match. Chris Gage and Christine Albert are an electrifying pair who offer a range of music from country and folk to rock and the blues. Employing a bouquet of instruments - from pianos to acoustic guitars - the duo leave show goers rocking one minute, then sitting back and taking it easy the next. The Austin-based singer-songwriters (who are a couple both on and off the stage) are often compared to other primo country pairs such as George Jones and Tammy Wynette. Albert and Gage have a portfolio of awards and a resume filled with media appearances and tours."

Glen Duckett "Flowers in the Desert" House Concerts, Brenham, Texas.
"Albert and Gage are individually very talented singer songwriters and together they are a power house of folk rock. Our audience was amazed at the talent. Christine Albert and Chris Gage are not to be missed. The house rocked...and the piano is still smoking. They'll rock you, soothe you and make you want for more."